Have you ever watched a film or read a book that spoke so deeply to you (good or bad) that you found yourself thinking about it months, even years, later? When the opening scene of a movie shows a woman giving birth on the kitchen table while the cook frantically tries to collect all the amniotic fluid in pots so that it can be dried and the remaining salt used to season the food, you know it’s going to be one of those movies. Like Water for Chocolate came out in 1992 but I only just watched the whole movie a few years ago.  To be honest, after the first scene I turn it off, but I couldn’t stop thinking about it until I made myself watch the entire thing, and I’m so glad I did, though I sill relive the scenes in my mind. It retraces the tragic love story of two soul mates, Tita and Pedro, who, despite living just a breath away from each other, are forbidden to be together.  Tita, the girl born in the kitchen, takes solace there through the years, cooking elaborate and intoxicating dishes imbued with a subtle magic that causes Pedro to crave her even more desperately.  I won’t dare spoil the ending, but like a 20th century, Mexican Romeo and Juliet, it leaves you reeling.  It is for Tita that I named this cocktail.

Despite how it may seem on Instagram, I’m really not a huge dessert fan. I’d rather finish a meal with a second glass of wine or a small cocktail than with a slice of cake. Especially if that cocktail is slightly sweet, with a hint of Mexican chocolate and a touch of spice.  My Chocola’Tita cocktail starts with 100 percent Blue Agave Tequila, to which is added a touch of crème de cacao, homemade cinnamon syrup, a dash of vanilla and a kiss of salted cinnamon sugar on the rim.  All the elements of a tragic Mexican love story in a glass (though I chose to use sea salt over the kind that was used in the movie).

Rim the glasses with the cinnamon sugar and set aside.

Place all the ingredients in a small sauce pan and bring to a simmer.  Stir to dissolve the sugar and simmer 3 -4 minutes.  Remove from the heat and allow to cool completely.  Remove the cinnamon stick, pour the syrup into a jar, cover tightly and refrigerate until ready to use.

Mix all the ingredients together and spread on a plate.  To rim the cocktail glasses, use a damp paper towel to moisten the rim of a glass, dip in the sugar and allow to dry. 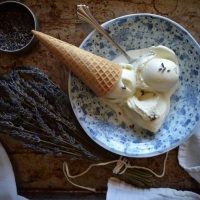 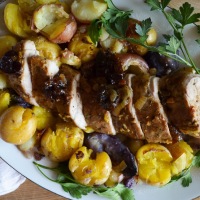