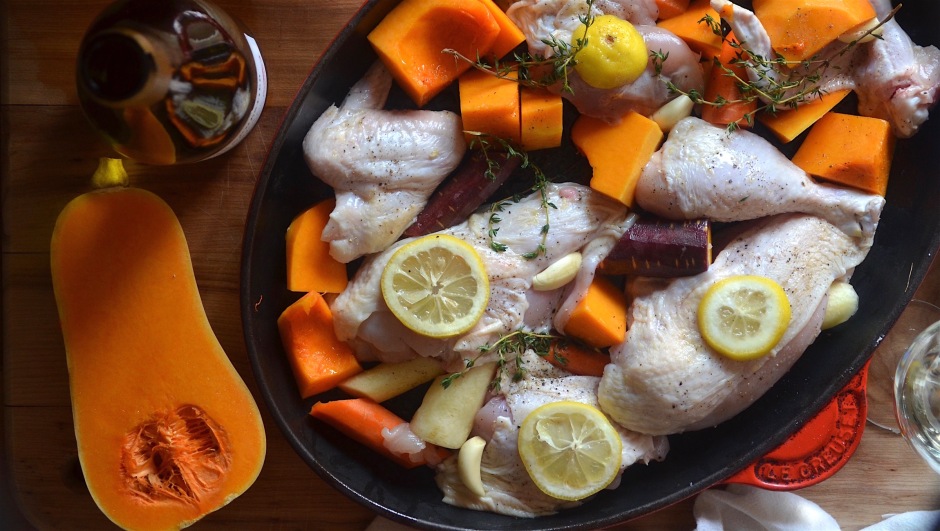 The kids went back to school last week.  To me, it feels a bit like sacrilege to begin in the middle of the sacred month of August.  But, over the last few days a cool fog has rolled in off the mountains and I’ve had to put extra blankets on the beds.  It’s like nature is saying, “It’s time,” and it truly feels like fall is nearly here, a little earlier than normal, as well, but who am I to argue with Mother Nature.  At night I still throw the windows open wide and by morning the house is blissfully cool – almost cold, even – and I wake, finding I’ve been dreaming of damp autumn leaves and the scent of cinnamon dancing through the kitchen air.

The first few weeks of la rentrée are always a little chaotic with meetings and painfully early mornings and everything that goes along with acclimating children (who’ve spent the summer reading until midnight) to a more “reasonable” schedule.  This year we’ve also had a string of doctors appointments to add to the mix, so “easy” is the name of the game when it comes to dinner.

I love to roast whole chickens year round.  I love the flavour of the crispy skin and the way it caramelizes on the bottom of the pan.  I like to carve it at the table and let everyone choose their favourite piece.  It feels like such a feast when there’s a whole bird on the table – like a mini, mid-week Thanksgiving!  But roasting a whole chicken takes a long time.  Not the best or easiest meal for this crazy back to school season.  The answer, at least in my book, is to simply cut the chicken up, nestle it in with a bunch of cinnamon-scented seasonal vegetables and roast them all together.  The flavour is much the same and the vegetables brown in the juices of the chicken.  It takes only about half the time of roasting a whole chicken, and while this isn’t exactly a “30 minute meal,” since the oven does all the work, it feels like I have the luxury of free time to clean the kitchen and wash the dishes, sparing myself all that work after the meal is over – either that or I’ll pour myself a glass of wine and step out on the back deck and save the mess for my husband.

For a long time I was intimidated by the idea of cutting a whole chicken into 8 parts.  But it’s really a very simple process and once you get the hang of it, it takes about 2 minutes.  There are several great “how-to” videos out there on YouTube.  It’s certainly worth the effort for a couple of reasons.  First, I like to buy high-quality, organic chickens which often aren’t available pre-cut.  Additionally, when I cut up my own chicken, I get the backbone and this is “gold” when it comes to making the best chicken stock.  I freeze them and when I have several I throw them all in big pot, cover with cold water and a dash of vinegar, add in some aromatics – onion, garlic, celery, carrots, bay and cloves – and slowly bring to a simmer.  Of course, we all deserve a break during this busy back to school season, so you could certainly save yourself the effort by buying a chicken that is already cut-up – or simply having your butcher do it for you.  This recipe is all about simplicity.

Happy early autumn in the middle of August! 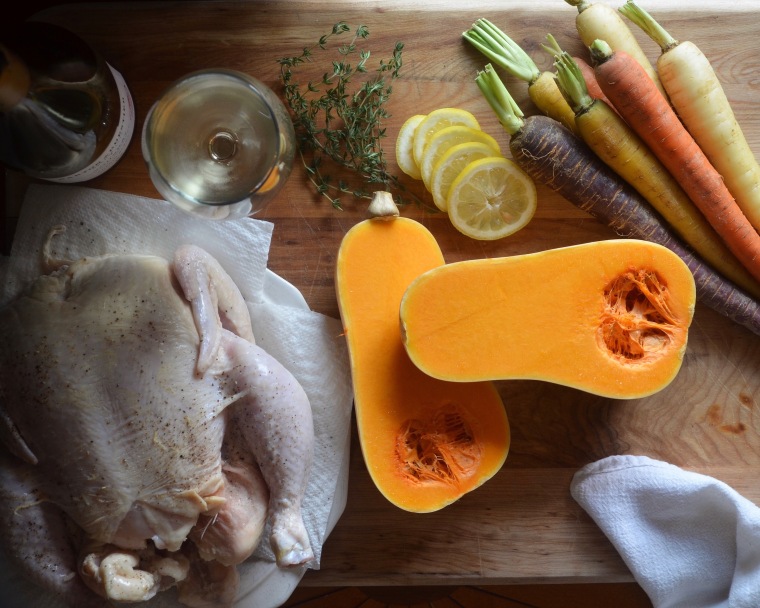 This dish is like a cozy sweater on a cool fall evening.  Savoury butternut squash,  warm cinnamon, comforting roasted chicken.  I like to keep it easy and serve it straight out of the baking dish at the table with a simple loaf of country bread or baguette on the side.

Preheat the oven to 375 F (190 C).  On a large baking sheet or roasting pan, toss the carrots, butternut squash and garlic with the olive oil, cinnamon and salt and pepper.  Spread the vegetables in an even layer. 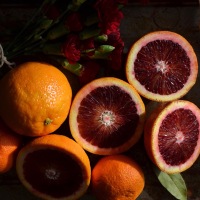 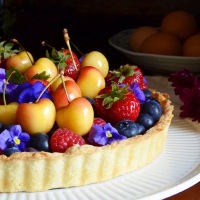 “Let the labyrinth of wrinkles be furrowed in my brow with the red-hot iron of my own life, let my hair whiten and my step become vacillating, on condition that I can save the intelligence of my soul - let my unformed childhood soul, as it ages, assume the rational and aesthetic forms of an architecture, let me learn just everything that others cannot teach me, what only life would be capable of marking deeply in my skin!” -Salvador Dalí . . If nothing else, at the end of my life, I want to have some fantastic stories to tell to my grandchildren. When I was choosing these oranges I was so drawn to the ones with the deepest creases and most cavernous wrinkles. The shadows dancing across their lines told the most interesting stories. And it made me think, what if I could be more like this orange? Proud of the wrinkles that life’s iron has furrowed into my brow. Instead of covering or filtering them into non-existence (looking at you, Paris), what if they were used to define the uniqueness of my character as if they were the lines of my biography, written by time and yet unfinished, the story of a life well-lived? . . #thoughtsonlife #thinkingoutloud #stilllifephotography #cerisechérie #inmyhands #winterlight #goldenhour #lifeandthyme #foodforthought
There’s a subtle extravagance in bringing a platter of golden, roasted birds to the dinner table. No matter how humble the birds, serving them whole seems to elevate a simple weeknight meal into a feast. The recipe for my Cornish Hens with Blood Oranges & Thyme is at the link in my bio today. . . #cerisechérie #onmytable #frenchfood #inmykitchen #winnerwinnerchickendinner #feedfeed #f52grams #easyrecipes
I attended a gardening seminar today, taught by two master gardeners, and came to the conclusion that all my past mishaps and failures were due, not to my lack of a green thumb, but rather to the quality of my soil. It’s nice to know it’s not entirely my fault. I’m already dreaming of this summer’s garden and, while opening a bottle of rosé in January may be taboo, I’m in a summer state of mind, so #winenot ? . . 2018 @gruetwinery Rosé of Pinot Noir. This wine features the heady floral aroma of a honeysuckle bush covered with bees. The flavours lean toward rose petals and peach blossom, with notes of wild strawberries and Rainier cherries. It’s not a bit sweet, which surprised me, having just finished a bottle of bold old-vine Zinfandel yesterday which, perhaps, had a little too much residual sugar. This rosé is as crisp as a cotton shirt dried in the sun, and totally refreshing. There’s a bit of bitterness in the finish and a slight minerality, both of which provide a nice balance to the floral notes. It’s a great way to experience summer vicariously in the dead of winter. And, though unconventional, I think it will pair nicely with the braised Shanghainese pork that I’m making for dinner tonight. . . . #pleaseexcusetheiphonepic #gruetwinery #roséwine #wineoclock #winereview #tastingnotes #winelover #onmytable #cerisechérie
Cosy cashmere, a chair that fits me just so, a glass of old vine Zin - a few of the things that make me happy on these frosty January days. I’ve heard so much about #DryJanuary recently. No thanks. Isn’t January harsh enough? Cheers to the weekend! 🍷#fridayvibes #winelover #wetjanuary #zinfandel #lodiwine #cheers #wineoclock