We were snowed in for three days last week, with work closed and school canceled, which is very unusual for October in Colorado. A light dusting of snow is expected and welcomed, but it’s equally expected to melt in the sunshine the next day.  To have snow on top of snow on top of snow with subzero temperatures for days on end before Halloween is completely bizarre.  In the end, we had over a foot of snow outside our back door.  I don’t think anyone really took the weather forecast seriously.  I mean, this is Colorado and, while we are well-equipped to deal with snow in the winter (where it belongs), we also like to brag about our 300 days of sunshine every year and joke that if you don’t like the weather, wait five minutes.  I hope this latest storm doesn’t portend a harsh winter.

In any case, the kids weren’t complaining.  They’d had the previous week off for fall break and saw the snow as a natural extension to their autumn holiday, an excuse to pull out the sleds again, and a (very) welcome delay in getting back into the school routine.  But I get a little stir crazy when cooped up in the house all day, especially when I can’t get to the market.  I love to shop for food almost daily, and find myself in a panic when there isn’t fresh fruit on the counter or vegetables in the fridge.   It’s for days like those that I like to have a few “snow-day” meals in my back pocket.  These are simple meals that can be made entirely with pantry staples.  I’ve shared many of these recipe here, under the tag, quick and easy.  This creamy pumpkin black bean soup is another one.  It’s incredibly hearty with the flavours of spicy cumin, ginger, coriander and red pepper – the perfect way to warm up after a day in the cold.  Bonus that it comes together in fifteen minutes flat.

I’m not sure where I first found this recipe but it was in the days before Pinterest and, being rather old-school, I wrote it down on a card.  I used to make it often in the winter when Rich and I were first married.  We were both working long hours and I was finishing up my degree so fast and easy recipes were my life-savers.  Rich loves anything pumpkin and this soup was a favourite of his.  I made it so often, in fact, that I gave the recipe to my mom and it became a standard in her kitchen, too.  Long story short, when we moved to the gulf coast of Florida where the winters are mild and warm, I quit making hearty soups like this one.  I completely forgot about this recipe and, between all our moves since, I lost the card.  I don’t know what triggered my memory of this soup recently – maybe it was the early-season snow – but I couldn’t stop thinking about it and craving the savory flavours of cumin and coriander with the creaminess of the pumpkin.

“Remember that pumpkin soup I used to make?” I asked Rich, feeling nostalgic. “Today would be the perfect day to make it!”

After going through all my recipes, unsuccessfully trying to find it, I finally called my mom and had her text me a photo of the recipe I originally gave to her.  Funny how recipes can be passed back and forth like that.

I still love having recipes written on cards or in books.  It means I can completely disconnect when I cook, without having to turn on my computer or deal with the distractions of my phone. I wanted to share it here on the blog to give it a permanent place in cyberspace should I ever lose it again.  And maybe you will love it enough to write it down on an old-fashioned recipe card, too, or at least Pin it. 😉

Heat the oil in a large sauce pan over medium heat.  Add the shallots and sauté until soft, about 5 minutes.  Add the garlic and cook a minute or two longer.  Add the spices and stir to toast for 15 – 20 seconds, until fragrant.

Slowly stir in the chicken broth.  Add the pumpkin, tomatoes, black beans, salt and pepper.  Bring to a simmer.  Cover and cook for 10 minutes, stirring frequently.

Remove from the heat and stir in the cream.  Taste and adjust the seasonings, garnish with fresh cilantro just before serving.  (Alternately, the cream can be served in a creamer and passed at the table so that each person can add as much or as little as he or she likes.) 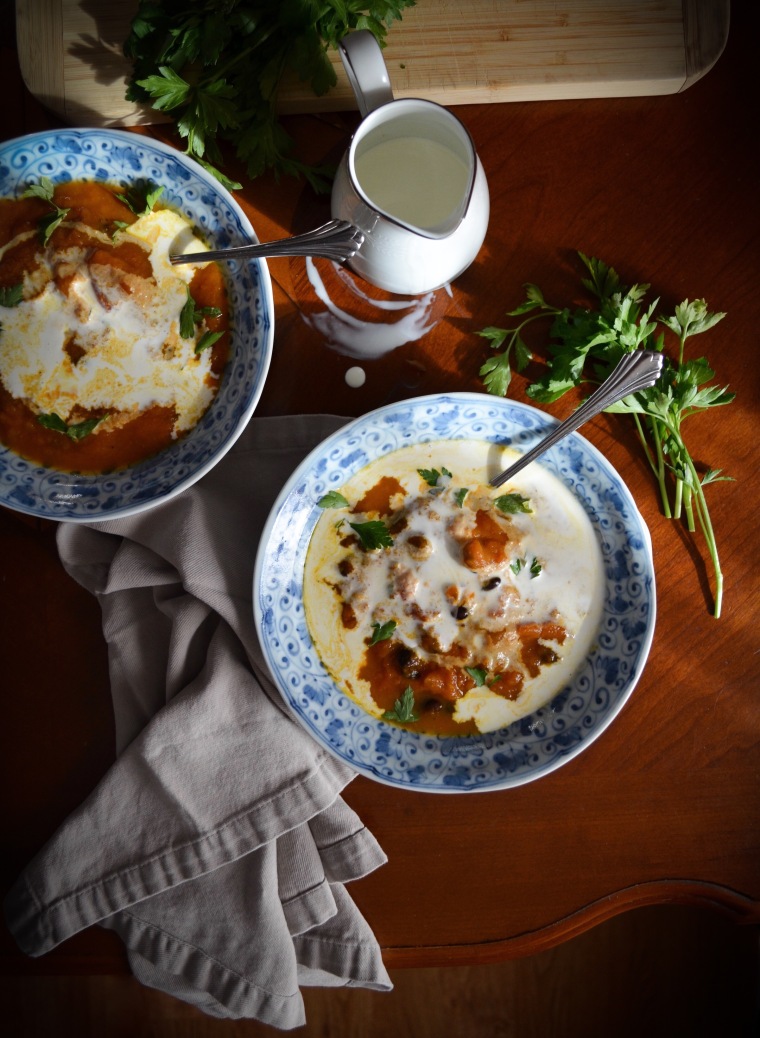 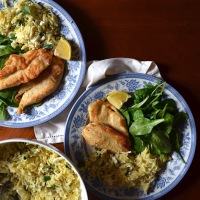 Armed and dangerous. 👩🏻‍🍳 #andiknowhowtouseit . . Video editing tonight and I’ll tell you something I’ve learned: you never realize how many strange habits you have until you watch yourself back on tape. For instance, every time I stir something, or whisk, or beat, or serve something, I always tap the spoon on the edge of the bowl or pan exactly three times. I never knew until I watched the clips back and they were full of awful “tap,tap,taps... tap,tap,taps.” Ugh! Now it’s stands out to me like a sore thumb! 🤦🏻‍♀️ . #inmykitchen #kitchenstories #badhabits #weekendbaking
I saw the first white asparagus of the season in the market this morning. While I didn’t buy it (too early?!), it did start me dreaming of all the fresh Spring salads we’ll be having in a few weeks. Guys, I’m all wintered-out! 😩 The #recipe for this classic asparagus vinaigrette is at the link in my bio, today. Pin it to your “Dreaming of Spring” board! . . . #cerisechérie #inmykitchen #asparagusseason #veggingout #dreamingofspring #easyrecipes #feedfeed @thefeedfeed #eatseasonal
I made a pie while Rich filled out applications to adopt another Belgian Malinois. 🤭 If we get the dog I’ll write at length on why I DO NOT recommend this breed as pets. Unfortunately, due to their presence in the news recently, people think it would be cool to own one of these Maligators and are buying them irresponsibly, only to find that they’ve bitten off more than they can chew. (Pun totally intended!🤣 ) That means there are lots of dogs who need new homes. These surrendered dogs are high energy, super intelligent, strong-willed and have very specific training needs and the rescue agencies are extremely selective about re-homing them. They’re specifically looking for owners with previous Malinois experience and companion dogs. It will be a journey, as we raised Natasha from a tiny puppy and I’m not sure if an older dog with little or no training will be easier or more difficult. But we’ve worked with an amazing dog trainer and I’ve learned so much about communicating with this particularly stubborn breed of fur baby from him. We’ll see! In the meantime, blueberry pie, if the dog doesn’t eat it off the counter first! 😬 #maligator #inmykitchen #lifeupdate #blueberrypie #weekendbaking #sweettooth #highaltitudebaking
Cookies on a snow day earlier this week. ⛄️ Recently I was asked why I don’t share more photos of the kids. It’s because they & I have an understanding - I won’t share any photos of them without their consent and approval. It’s a matter of respect. There’s too much of that crap going on in schools these days. Kids surreptitiously taking pictures of each other, often unflattering or in awkward positions, and blasting them across social media. I think it’s the most disrespectful form of subtle cyberbullying out there and it makes me angry. I’m glad we didn’t have to grow up in the presence of hundreds of cameras everywhere, but that makes it even more difficult to find ways to address. My personal policy is that if my kids don’t want their photos taken or shared, I respect that and they can trust that I’ll keep my word. They’re at ages now where being in mom’s photos isn’t as fun as it used to be and I’m totally fine with that. Sometimes they let me borrow their hands for shots, though, and that’s cool. Home should be a place where they can relax and feel comfortable without having to constantly evade or pose for a picture. And if, by chance, they want to be photographed and let me share it, I’ll relish the moment! 😁 #momlife #motherhoodunplugged #momofteens #momoftweens #candidchildhood #inmykitchen #cookiesofinstagram